We’re proud to announce that on November 6th that we will release the World Première recording of three unique orchestral works from Simeon Ten Holt, one of the Netherlands most iconic 20th century composers. The release includes the first recording of Anthony Fiumara’s orchestration for Symphony Orchestra of Ten Holt’s seminal work “Canto Ostinato” along with two additional works by the composer, that for unknown reasons prior to this recording, had never been previously performed.

In addition to the unique repertoire we are also thrilled to present the music on CD as well as Blu-ray Disc where the entire program both is available in Auro 3d and Dolby Atmos, providing the listener with a unique 3D, Immersive Sound listening experience.

The three works included on the album are performed by the Dutch Noord Nederlands Orkestt, conducted by David Porcelijn and were recorded live in concert at the Oosterport in Groningen, the orchestra’s home concert hall.

The title piece “Canto Ostinato” is, without doubt, Ten Holts signature composition and garnered the composer international recognition. This work is often seen as belonging to the minimal-music genre and Ten Holt of described the works structural progression as akin to the development of a genetic code. The work was created as more than one hundred individual short sections each lasting a few bars and in the key of Bb Minor. Eventually composer Andries Hubers organized these sections to a single score. After this Ten Holt rearranged the score a number of times leading to the fact that a number of different versions of the work exist.

In 2016, composer, Anthony Fiumara orchestrated the work for the Dutch Residentie Orkest based in the Hague. Fiumara stated: “Translating this work, originally for 4 pianos, to a full symphony orchestra is akin to translating a table conversation for 60 people.”. In other words, “It is as if Canto Ostinato can now be heard in colour.” Fiumara’s orchestration of Canto Ostinato was premièred in concert by Otto Tausk and the Residentie Orkest however, this performance recorded in 2017 by the Noord Nederlands Orkest is the first time this version on Canto Ostinato has appeared on CD. 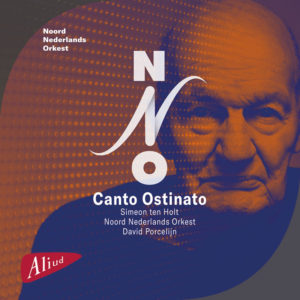 The other two works presented on the album, “Une Musique Blanche” and “Centrifuga” were composed as part of a commission by the Dutch Ministry of Culture. Both pieces were intended to form part of a trilogy however a third piece never materialized and the two compositions, until this performance, had never been performed.

“Une musique blanche” is a twenty minute long composition Ten Holt worked with electronic music specialist (Sonologist) Stan Tempelaars. The piece consists of two string groups interacting with four orchestral groups, each with their own specific sound-scape. The third piece titled “Centrifuga” rounds out the program. Ten Holt provided a short explanation of the piece: “Centrifuga” is based simply on the use of four tones. These tones, used in varying order, form the basis for four groups that eventually form a phrase. This phrase, in it’s horizontal form is also mirrored in the vertical. To realize this in the acoustic world ten Holt worked with groups of four instruments (four flutes, four Oboe’s, four Horns etc).

The Album is due for worldwide release on the 6th of November 2020. The physical album includes a Double CD, a Blu-ray disc with the program presented in Auro 3d and Dolby Atmos and extensive liner notes. In addition the Blu-ray disc is also configured for mShuttle allowing the listener to be able to stream the music on any device connected to their home audio network.

Both Auro 3d and Dolby Atmos provide the listener with a three-dimensional realistic sound experience unlike anything before. Thanks to a unique ‘Height’ channel configuration, acoustic reflections are generated and heard naturally due to the fact that sounds originate from around as well as above the listener.