View cart “Spirale Piano Trio” has been added to your cart. 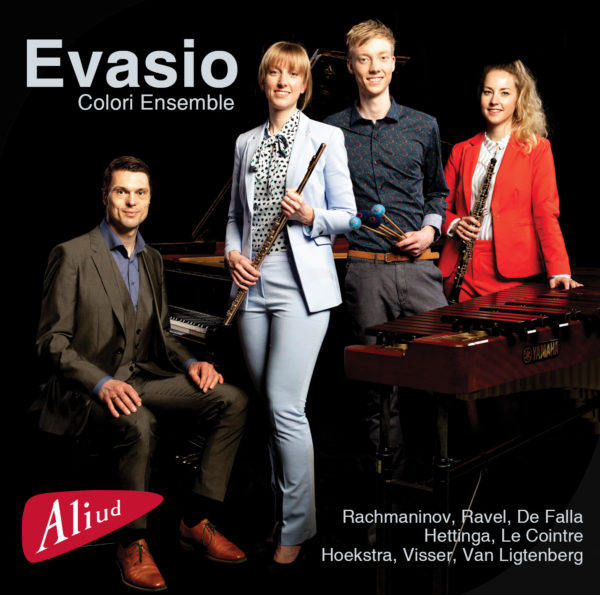 The title of this CD reflects the mission of the Colori Ensemble. To evade, the literal translation of the Latin evasio, is symbol to the ensemble’s wish to escape daily musical routine and to elude the beaten track. To throw new light on the existing, but also to create new sounds by playing new compositions by contemporary composers. To emphasize that these composers stand on the shoulders of illustrious predecessors, this CD is combining these new compositions with arrangements of well-known repertoire by composers whose works have withstood the test of time already. The chosen compositions are fitted to the specific musical cast of the Colori Ensemble. The result can be compared to add subtle colouring to a black-and-white photograph, revealing details that might be overlooked, or in this case overheard, in the original. The four contemporary composers on this CD, all originating from or working in the Dutch province of Friesland, each in their own way stand on the shoulders of the great composers from the past: sometimes reminiscent, but at the same time looking toward a bright musical future. The musicians consider the posthumous contribution of the Frisian poet Tsjêbbe Hettinga as an inspiring gift. So it is no coincidence that this poet has the first and final word on this CD. Starting from distant shores (Frjemde Kusten), the Colori Ensemble depicts an imaginary and musical journey, escaping from (un)known places and presenting different views. Upon arrival (Oankomst) the cycle is completed by the poet’s welcoming words Kalispera file (greetings to you, my friend).

COLORI ENSEMBLE
Rianne Jongsma (flute), Wilma Jongsma (oboe), Arjan Jongsma (marimba) and Frans Douwe Slot (piano) have all been laureates with various prestigious Dutch music contests. They have completed their musical education on the conservatoires of Amsterdam, The Hague, Groningen and Utrecht. The ensemble’s name derives from the composition Colori, written especially for them by Wim van Ligtenberg in 2012. In addition to commissioned compositions, the ensemble plays arrangements of classical pieces. In 2015 the ensemble recorded the CD Colori miti with Aliud Records in cooperation with the Frisian Music Archive.