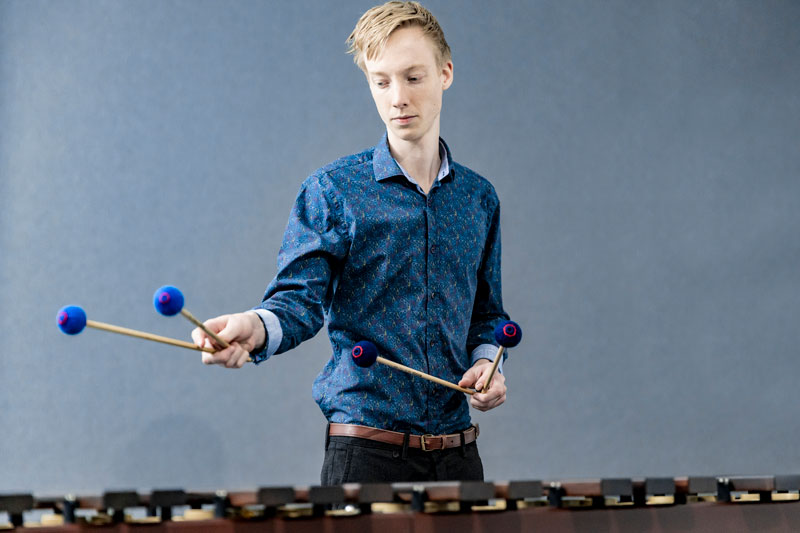 Arjan Jongsma (1995) has been performing at various concert venues since the age of 12. During his career to date he has performed at the International Chamber Music Festival Schiermonnikoog, Festival Wonderfeel ’s-Graveland, Bach Festival Dordrecht and the International Chamber Music Festival Utrecht. Furthermore he has performed as a soloist with orchestras including the Residentie Orchestra, Noordpool Orchestra, Philips Symphony Orchestra, Dutch Theater Orchestra, Youth Orchestra of the Netherlands and the Haydn Youth String Orchestra. In addition, as a freelance orchestral musician, Arjan has substituted with the Royal Concertgebouw Orchestra (timpani), RCO Brass (timpani), Ballet Orchestra (percussion) and various other orchestras and is associated as a timpanist with the Nieuwe Philharmonie Utrecht.

During his studies he has won many awards including 1st price during the National Finals of the Prinses Christina Concours in The Hague, the KPMG Pressprize, the Rubens Kwartet Prize, the Accelerando Classic Award and the jury and audience prize at the Haydn Music Festival 2007 in Groningen. Arjan is a member of the Colori Ensemble and with this ensemble he could be heard on the Dutch radio and seen on the Dutch television show ‘Vrije Geluiden’. The Colori Ensemble has been performing concerts throughout the Netherlands including venues like the Recital Hall and Mirror Hall of the Concertgebouw. Arjan is a teacher at the Percussion Friends-Sweelinck Academy at the Conservatorium van Amsterdam. In 2017, 2018, 2019 and 2020 (online) he gave lessons and recitals during the International Marimba Summer Camp of Theodor Milkov in Greece and was teaching during the Percussion Friends Chamber Music Academy in 2017, 2018 en 2020 (online).

Arjan plays a Yamaha YM-5100 marimba, which has been made possible by the Prince Bernhard Culture Fund and Stichting Eigen Muziekinstrument. He obtained his Bachelor’s and Master’s degree, with specialization marimba and timpani, at the Conservatorium van Amsterdam. Arjan Jongsma is a Yamaha Artist.