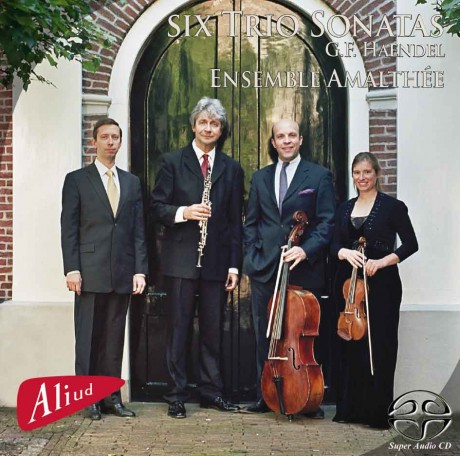 In all likelihood these sonatas were written by Handel when he was around eleven years old, in 1696. At the time, he readily wrote for the oboe, which was, by his own admission, his favourite instrument; consequently, these sonatas were long considered to be works for two oboes; yet, the use of double strings in the first movement of the third sonata leads us to believe that the handwritten composition was for oboe and violin, two richly contrasting voices with complementary tones.

For the past four years and thanks to the Duke of Saxe-Weissenfels’ mediation with his family, Handel had been a pupil of the Halle organist Friedrich Wilhelm Zachow. This enlightened mind had already given him a very European musical culture, teaching him to compose and play the organ according to the different musical styles of the time. The trio sonatas HWV 380-385 are all composed following the model of the sonata da chiesa which had remained hugely fashionable since Corelli’s works: in four movements, slow-fast-slow-fast; they demonstrate a very strong and rigorous knowledge of counterpoint.

The performance of these sonatas by L’Ensemble Amalthée aims to showcase the characteristics of the works as much as possible while acknowledging in them the fusion of various European musical trends already felt by Handel: the art of ornamentation, that of pedalboard and the different articulations…