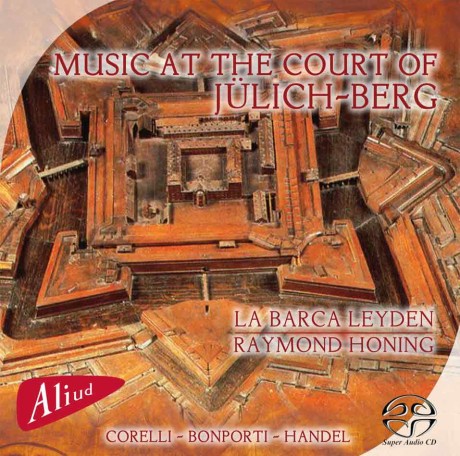 Music at the court of Jülich-Berg

He married archduchess Maria Anna Josepha of Austria in 1678, which gained him access to the rich musical culture of the
Emperor’s court. On August 1, 1679, he became the regent of the dukedom of Jülich-Berg with capitals in both Jülich and
Düsseldorf. Düsseldorf was the focal point of his reign; he helped develop it to become a center of art and culture. After
the death of his first wife in 1689, Johann Wilhelm married Anna Maria Luisa de Medici in 1691. After the death of his
father in 1690 he became the Elector of Pfalz and one of the distinguished leaders of his era. Johann Wilhelm shared his
passion for art and music with his new wife. The opera performances during Carnival in Düsseldorf in the years following
1690 became legendary. The court orchestra, which Johann Wilhelm formed, could compete with Imperial standards, and was
admired by contemporaries in 1711 at the Imperial Election in Frankfurt. In the words of a guest of the Düsseldorf court,
“[the orchestra was] a felicitous lot of fine artists.” The amount of money Johann Wilhelm invested in courtly show was not
atypical for its time, but he did receive criticism from his fellow Electors. Johann Wilhelm dreamt of being named a King.