The Album, includes a single stereo CD and a Blu-ray disc in Auro 3D providing the listener with a unique 3D, Immersive Sound, listening experience. In addition the album also features high quality packaging, extensive liner notes and additional downloadable content. Along with the solo Marimba performances, Jongsma is joined by the chamber music group the “Colori Ensemble” for his adaptation for marimba, flute, oboe, cello and piano of Ravel’s “Concerto for the Left Hand in D major”.

Professor at the Hochschule für Musik in Detmold and the Conservatorium in Amsterdam, Peter Prommel, wrote in his foreword to the liner notes “By listening to this recording, it will become obvious that it is the start of a new era of interpretation of great pieces on the marimba. At the same time, new pieces by composers with a keen ear for phrasing and colouring are seductive to the ear and display the beauty of the wood that the marimba player touches.”

The album includes two works from Johann Sebastian Bach, the Lute Suite in E minor (BWV 996) and the Prelude from the English Suite No. 2 in A minor, (BWV 807). The Lute Suite was originally written for an instrument called the “Lautenwerck”. While no original specimen of this instrument has survived, it was one of Bach’s favourite keyboard instruments and at the time of his death, he owned two of them. Similar to a harpsichord, but with gut rather than metal strings the instrument produces a mellow tone far closer to that of a lute. The marimba is extremely well suited to reproduce this warm and delicate sound that Bach presumably had in mind. Please, pay special attention to the warmth and depth of sound in the low registers, that corresponds so wonderfully with the aspects we value in the sound of the lute.

Jongsma first explored the music of Ravel while studying for his masters degree at the Conservation in Amsterdam. “I discovered that the typical sound of marimba seems to fit the impressionistic world of Ravel perfectly” said Jongsma. He went on to say that this was the main reason “to try out some of his works for piano solo on the marimba, which resulted in playing Menuet sur le nom d’Haydn and Sonatine. Almost no changes to the score were needed to be able to play those pieces, apart from some chords that I had to reduce to four voices.” 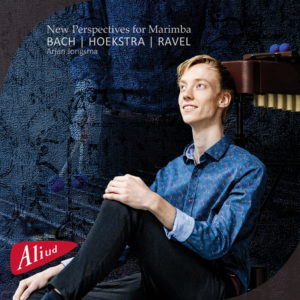 One of the major pieces presented on this album is Ravel’s “Concerto for the Left Hand in D major”. When speaking of the choice to adapt this piece Arjan explained “Obviously, when diving into Ravel’s oeuvre, the Concerto for the Left Hand in D major is a masterwork not to be missed. One of my general goals is to show as many colours as possible on the marimba. To be able to do that, we need pieces that give us those possibilities and I found out the Concerto for the Left Hand would push me to extend this range of colours even more, varying from beautifully fluent, legato lines in the final cadence, short militaristic notes in the allegro, to powerful, heavy statements in the first cadence. In the adaptation we made for marimba solo, flute/piccolo, oboe/English horn, cello and piano, we tried to recreate the orchestral sound in a chamber music setting. One big advantage of this setting is that, as a marimba player, one can make use of the full dynamic range of the instrument without having to push its limits, since it is easier to balance with a small ensemble.”

Looking for a bridge between the polyphonic works of Bach and the impressionism of Ravel, Jongsma commissioned a new work from Dutch composer Sipke Hoekstra. The result, “Clio’s Patchwork, Fantasia for Marimba”, fits perfectly in this role. Arjan stated “Clio’s Patchwork is a great addition to the marimba repertoire. Together with the adaptations of the music by Bach and Ravel, to me it perfectly represents the concept of this cd: offering new perspectives for marimba.”

The Album is due for worldwide release on the 4th of July 2021 and is available as a stereo CD and includes a Blu-ray disc with the program presented in Auro 3d, immersive sound. Auro 3d provides the listener with a three-dimensional, immersive sound, realistic sound experience unlike anything before. Thanks to a unique ‘Height’ channel configuration, acoustic reflections are generated and heard naturally due to the fact that sounds originate from around as well as above the listener.